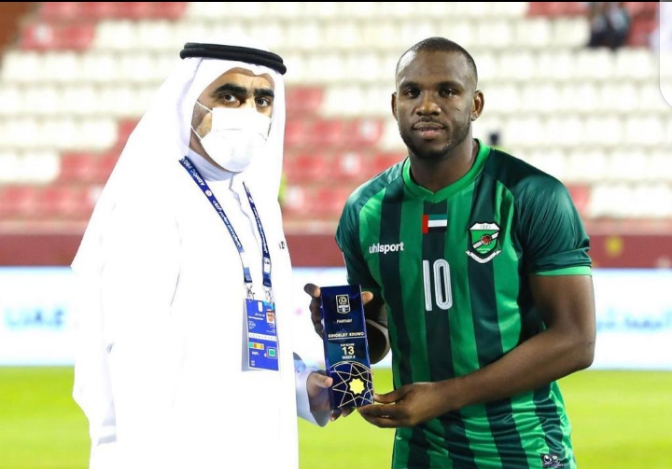 Kingsley Eduwo’s heroic display for Al Urooba last week against Sharjah did not go unnoticed as the Nigerian has been rewarded with the Arabian Gulf League player of the week award, owosports.com.ng reports.

Eduwo was in fine form as he bagged a brace to help Al Urooba secure an all-important 2-2 draw at home against Sharjah FC, a performance which earned him the Player of the Week gong.

The striker had the award presented to him today (Wednesday) in front of Al Urooba fans just before their disappointing 4-1 defeat to Khorfakkan in their Arabian Gulf League week 9 clash.

Eduwo in a chat with www.owosports.com.ng dedicated the award to his second son Japhet Eduwo.

“I’m dedicating this my first individual award in the United Arab Emirates top tier division to my son second Japheth,” he said.

“The award is for him because he’s the only one in my family that I haven’t dedicated an award to. In the past, I have dedicated one to my wife, mum, and also to my first son Skilton’, he explained.

The former Lobi Stars striker who is nursing an injury had to play the game with an injection, as the club has been hit with injuries cries.