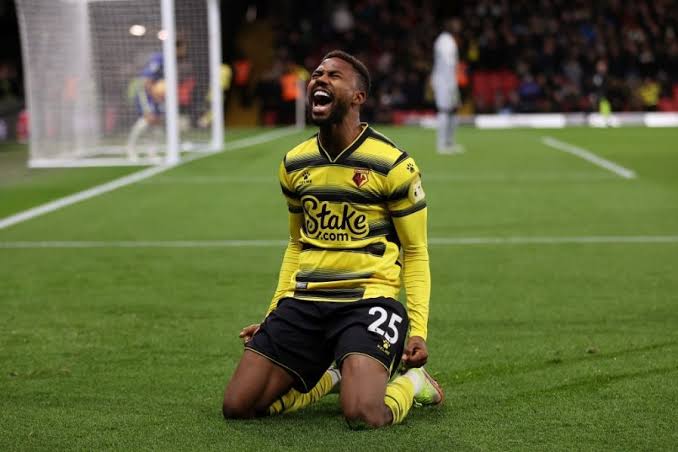 Nigerian star Emmanuel Dennis has been crowned the winner of both the Stake Player of the Month and Goal of the Month awards for December at Watford.

The 24-year-old attacker, who has enjoyed a good run of form since joining the Hornets from Club Brugge, was voted the Player of the Month by the club’s supporters and also claimed the Goal of the Month prize after his wonder strike against West Ham United at Vicarage Road on December 28.

On winning the player of the month, Dennis, who has so far scored eight Premier League goals from 17 appearances, managed to beat Moussa Sissoko, and Golden Girls Emma Beckett and Georgie Ferguson.

“Emmanuel Dennis has been crowned the winner of both the Stake Player of the Month and Goal of the Month awards for December,” Watford confirmed in a statement on their official website.

“The in-form forward hit the ground running during the first half of his maiden Premier League season and has now clinched the Player of the Month gong for the third time [August, November, and December].

“In the POTM competition the Nigeria international was positioned against Men’s teammate Moussa Sissoko, and Golden Girls Emma Beckett and Georgie Ferguson.

Despite the postponed games and the strong group of nominees, Dennis was able to maintain his form taking his tally for this season to eight goals with three more strikes against Chelsea, Brentford, and West Ham United.”

The statement continued: “In the Goal of the Month category, the 24-year-old faced tough competition with three other wonderful strikes over the festive period.

“With two composed finishes in the running for the plaudits, it would be the latter against West Ham, Watford’s final goal of 2021, that would secure Dennis’ title.

“The forward produced a fantastic move to find the top corner with his left foot, dribbling past West Ham’s centre-backs to release a devastating finish into the opposite corner.”

The two awards come just a week after Dennis failed to link up with Nigeria squad for the Africa Cup of Nations in Cameroon. The forward was among the players named in the squad for the competition by interim coach Austin Eguavoen but Watford allegedly refused to release him.

Nigeria are pooled in Group D of the competition alongside Egypt, Guinea-Bissau, and Sudan and they will open their campaign with a game against the Pharaohs at Roumde Adjia Stadium on January 11.

Dennis will be in line to feature for Watford when they travel to take on Leicester City in the third round of the FA Cup at King Power Stadium on Saturday.