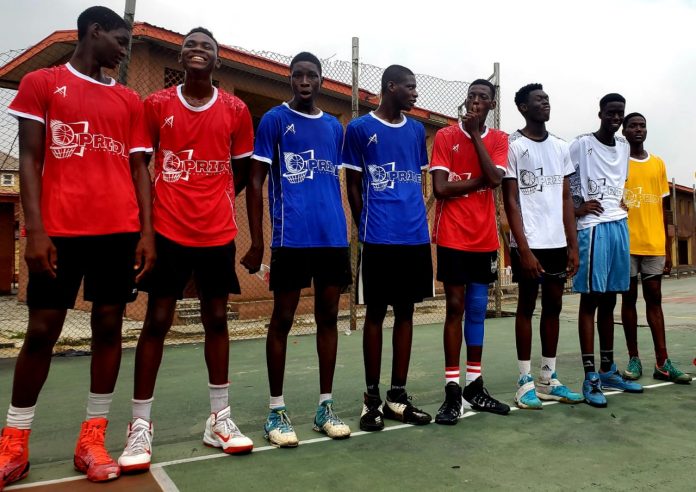 The duo co-founded Pride, a non-profit in the United States of America hope to cater to providing resources including equipments, grants and scholarships to budding basketball talents in Nigeria whom they see in themselves many years ago when they took to playing basketball. This they believe is their way of giving back to the sport that took them off the street and gave them an opportunity to get an education through a sport scholarship and travel to the United States where they both now reside.

“Basketball saved my life, I would have become a tout roaming the streets of lagos. The irony is I never liked practice, in fact I missed practice but always showed up for pick up scrimmages every evening. No matter where I was. “

“I know that does not make sense but it was enough to get me off the street” Oshunnubi told the campers.
Co-Founder Adeola Alade believes coming back home to help out was no-brainer after being away for so long and seeing that the kids in the basketball community needs help.
“We came down here because we want the kids to know sports can give them life. Basketball gave us life”.

“We are trying to touch atleast 100 lives, which increases the odds of one or two becoming successful atleast. This is certainly not going to be a one off.”

Camp coordinator and Lagos State Basketball coach Lai Alimi gave kudos to Oshunnubi & Adeola Alade for their selflessness and commitment to develop basketball in the state.

“These guys flew in from the united states to support basketball with sport equipment, kids and the local coaches. Yes, the gentlemen grew up here in the neighborhood but the campers cut across the state not just Rowe Park. It spreads across Ilupeju, Dodan Barracks and Ajegunle and even as far as Edo State.

“Asides the skill and capacity development, we will be giving away balls to the kids and other equipments.

The camp was concluded with a 6 Aside mixed tournament with a N300,000 bounty with 16 year old Happiness Gladji helping her team to the championship win and the N150,000 winners prize and an exhibition match between ex-league players to peak the two day basketball fiesta.