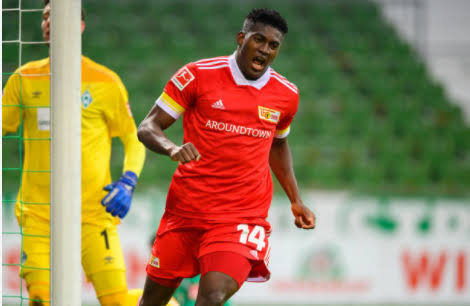 The 2013 FIFA U17 Worldcup winner had his most productive season in Europe in the just concluded season by registering a total of 20 goals and five assists in 43 appearances across all competition, including 15 goals in the German Bundesliga from 29 league games.

Owosports.com caught up with the former Liverpool striker inside the mainbowl of the Kwara State Stadium Complex Ilorin who had returned back home to spend the break with his family and friends.

Speaking, the striker distanced himself from any speculations linking him with a move away from Union Berlin stating that he has a four year contract running with the German side.

“For now i still have a four year contract with Union Berlin and I respect it”, He said.

“Everyone knows I’m a guy that loves dreaming, in life they said we should never stop dreaming, I will keep my dreams alive but for now I’m still a player of Union Berlin until I leave the club. So when it comes to question surrounding my move I think it’s a question meant for my agent”, he concluded.

The 24-year-old having spent the 2020/2021 season on loan at Bundesliga Union Berlin completed a £6.5million move from Liverpool to the German capital.