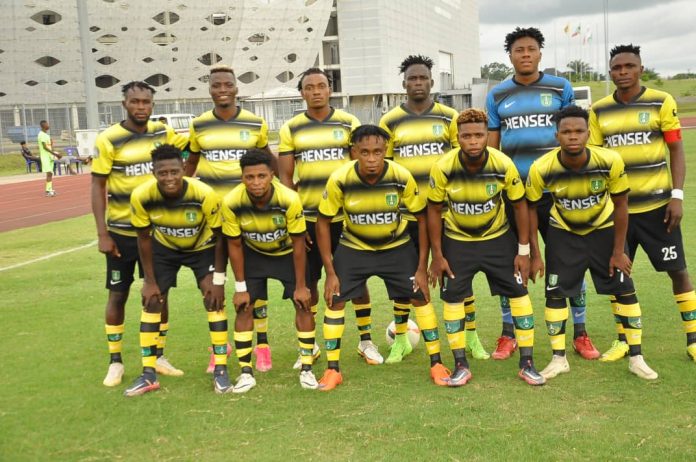 A renewed performance by FC ONE Rockets on Saturday evening at the training pitch of the Godswill Akpabio International Stadium ensured a 1-0 triumph over Warri Wolves in a matchday 15 Nigeria National League (NNL) encounter, thanks to Abel Abba’s 83rd minute strike.

FC ONE Rockets dominated possession from the onset, threatened the visitors but failed to direct any attempt on target with Maclyn Biokpo failing to capitalize on a goal-mouth scramble, while Damian Obodoagu’s glancing header in the 29th minute off Harrison Ebah’s cross narrowly missed the target.

Warri Wolves’s only threat came in the 42nd minute when Philip Archibong eluded Solomon Boyo and raced towards goal only to fire his attempt off target.

A penalty appeal after Maclyn Biokpo appeared to have been fouled in the first half was ignored to ensure both teams went into the break level.

Two minutes into the restart, Paschal Onunze forced Joshua Oladeji to a save from a free kick.

Abel Abba’s introduction by coach Emmanuel King in the 50th minute added bite to the frontline of the Indomitables, with the winger announcing his presence three minutes after coming on. His attempt went inches over the bar, a similar situation to that of Paschal Onunze in the 62nd minute.

With seven minutes left to play, Abel Abba showed his class, receiving fellow substitute, Francis Ayuba’s pass, driving forward, breaking the ball into his dangerous left foot and directing a delicious curler beyond Joshua Oladeji for the goal that proved the difference.

The result means FC ONE Rockets are unbeaten against Warri Wolves after the reverse fixture in Warri ended 1-1.

FC ONE Rockets increased their tally of points this season to 18, and will next Saturday travel to face Nnewi United in a matchday 16 tie.