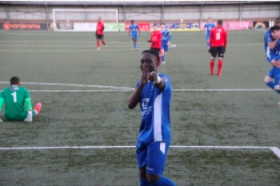 Alamu’s excellent displays for the U23 team of the Bluebirds have not gone unnoticed by clubs higher up the football pyramid.

Regarded as one of the most exciting players in the Surburban League, the highly-rated Irish-Nigerian player has tallied an impressive ten goals in thirteen appearances so far this season.

Championship high-flyers Fulham sent one of their talent spotters to run the rule over Alamu in last month’s fixture between Chippenham Town U23s and Corinthian, and he received a glowing report from the scout after scoring a hat-trick.

Forest Green Rovers, Bristol Rovers, Swindon Town and Cheltenham Town scouts are also aware of Alamu and the aforementioned clubs could firm up their interest in the midfielder in the coming months.

Blessed with physical presence and aerial ability, Alamu is close to making his first team debut for Chippenham Town.