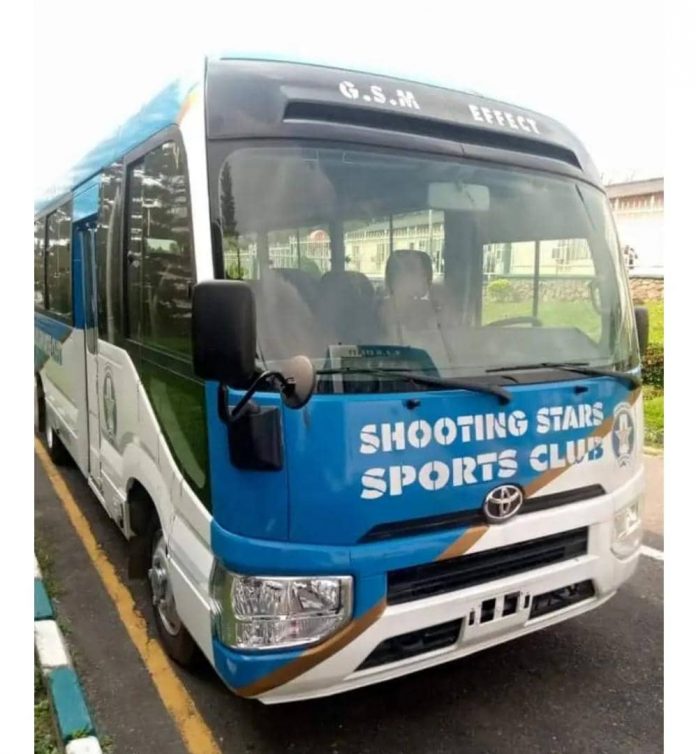 The governor, who gave this assurance at the governor’s office, Secretariat, on Wednesday afternoon, urged the team to go for the league title in the 2021/22 Nigeria Professional Football League (NPFL) season.

Addressing the management team of the Oluyole Warriors, during the presentation of brand new buses to both 3SC and Crown, governor Makinde, praised the management, coaches and players for securing the promotion ticket to the elite league.

“You will recall that when I came to watch your match, I said we will upgrade the stadium and we will ensure that all your home matches are played at night. We want to be coming to watch your home games”.

The Oyo State helmsman, while speaking further, urged the Oluyole Warriors to go for the league title, expressing the eagerness of the team’s followers to watch continental matches.

“It is not just to gain promotion, not just to stay in there. I don’t want to see you at the middle of the table. As a government, we will do everything humanly possible to support you.

“This work is just starting, this is the beginning, it has to be sustained. That is why we are giving you two buses so that your moving around will be smooth,” he added.

A visibly happy governor Makinde, revealed how some people made moves to force him to take action against the Rasheed Balogun led management, which he ignored due to his believe in the management.

In his words, he said ” I have received so many messaages regarding Shooting Stars. When we came in, they wanted us to sack the management because it was put in place by the previous administrarion.

“We refused because we believe in the management to do it. We were disappointed in the first year but the second year, you have delivered. For us we believe in continuity.

“They were asking how are they running Shooting Stars, I should ask questions . Why are some players being sold, where is the file where we have the list of players?

“Yes, we will have challenges , but together, we can work things out,” stated governor Makinde, who hinted that his government was all out to make the club better.

Ahead of the new season, the governor threw his door open for the club, asking the management to requeat for whatever is needed to get the results.

“If you want anything, if you want to buy four or three players, even if you want me to go to anywhere. If I need to support you with my personal resources, come back to us quickly and let us know what ypu need.

” When you were going to Enugu, l gave you all what you requested for and I am glad you can back with the desired results”, concluded governor Makinde.

Speaking earlier, Oyo State Commissioner for Youth and Sports, Asiwaju Seun Fakorede, thanked governor Seyi Makinde for giving his full support to the team and for the fulfilment of his promises.