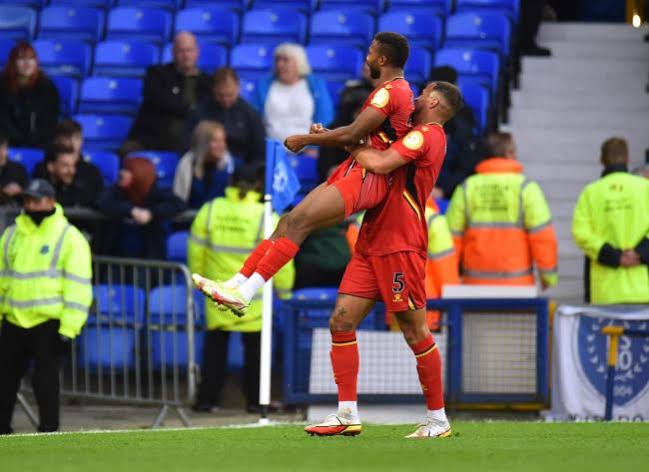 It was a crunchy lunch time Premier League encounter between two clubs who have atleast three players of Nigeria decent in their rank with the likes of Wilfred Ndidi, Williams Troost Ekong, Ademola Lookman, and Emmanuel Dennis going head to head against each other in an interesting encounter which ended in a six goal thriller with Ndidi’s Leicester City coming out victorious.

Five years after being sacked as Manager of Leicester City a season after he guided the Foxes to a historical Premier League truimph, Claudio Ranieri return to Leicester ended in disappointment as Brendan Rodgers’ side got back to winning ways in the Premier League with a 4-2 victory over Watford in snowy conditions at the King Power Stadium.

The former Leicester boss was given a hero’s welcome by the home fans before the game, but his side were behind in the 16th minute after James Maddison capitalised on an error from William Ekong.

Watford responded well and deserved their equaliser on the half-hour mark when Josh King netted from the penalty spot after Emmanuel Dennis was brought down by Wilfred Ndidi in the penalty area.

The snow started to fall heavily in Leicester making conditions difficult, but it did not stop Jamie Vardy as his quickfire double (34, 42) sent the hosts into the break with a commanding lead.

Watford got back into the game in the 61st minute when Emmanuel Dennis pounced to score after Timothy Castagne’s error, but they failed to build on the goal and Leicester made the game safe just seven minutes later when Ademola Lookman scored his first Premier League goal for the Foxes (68).

Wifred Ndidi alongside soon to be Super Eagles striker Ademola Lookman saw 90 minutes of action for Leicester City, while Williams Troost Ekong also featured for 90 minutes in Watford’s colors, Emmanuel Dennis who scored his fifth goal of the season saw 71st minutes as he was replaced by Fletcher.

Striker Kelechi Iheanacho was only considered to be good enough on Leicester City’s bench throughout the duration of the game.

The other premier league game with Nigerian players on parade, it was Frank Oyenka’s Brentford up against Alex Iwobi’s Everton at the Brentford Community Stadium.

Both Midfielders where on for their side from start to finish, Oyenka however picked up a 42nd minutes yellow card as Brentford stunned Everton as they earned vital win courtesy of Toney first half penalty goal.