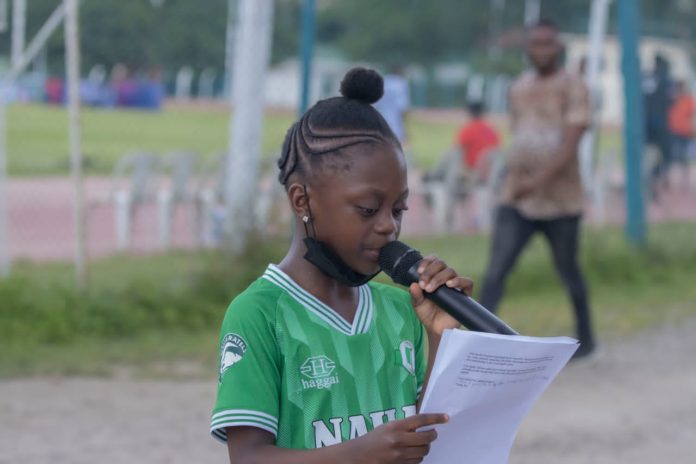 Eight years old Cherish Edeh, the daughter of the Founder and President of Ratels Sports Development Foundation (RSDF) gave an inspiring speech on girl-child education during the opening ceremony of the 2021 Flying Officers Cup to mark the international day of girl-child.

Young Cherish started her speech by saluting people at the event and thanked her father Barrister Paul Edeh for granting her the opportunity to speak in respect for his intend love, support and encouragement of girl child.

Despite being just a kid, Cherish have always had passion for the girl-child education. In 2020, she joined her dad and his friends to organize a charity football match, where money was raised for scholarships of over 30 young girls who were out of school because they couldn’t afford to pay their school fees.

“Nigeria accounts for more than one in five out-of-school children anywhere in the world. Although primary education is officially free and compulsory, only 67 percentage of eligible children take up a place in primary school,” she said.

She continued, “It is true that Girls suffer more than boys in terms of missing out on education. In the North-East and North-West for instance, only 41% and 47% respectively of eligible girls get primary education.

“Hence, this has increased the vulnerability of the girl child especially in the northern part of Nigeria.

“Sports at large and football in particular, has been a tool or an escape route for some of these girls to have a good life and build a career for themselves, even with little or no education.

“It is for this reason that my father, in his magnanimity and passion for promoting the course of the girl child, established Ratels Sports Development Foundation (RSDF), which begets Naija Ratels Football Club.”

She added that she has had the opportunity of interacting with the 11-year-old Naija Ratels new signing Mirabel, and draw the conclusion that there are many Mirabels’ out there who may not be fortunate to get a scholarship from her father.

“My conversation with her opened my eyes to the hidden potentials innate in alot of young girls on the street who neither have the privilege to go to school nor build a career in sports. We meet them in our everyday life; they are on the streets hawking and doing other menial jobs. Some are even abused and dehumanized daily.

“Like I said earlier, offering young girls an opportunity to build a sporting career is the reason why Ratels Sports Foundation was established. But then, I strongly believe, just as it is in the developed countries, formal education is necessary for every child.

“For this reason, I asked my father to offer Mirabel scholarship up to the university level, which he obliged.”

Every year since 2012, International Day of the Girl is celebrated on Oct. 11 to recognize how hard being a girl can be. The United Nations (UN) created the holiday to celebrate the potential of girls in different cultures around the world, and to highlight the threats, discrimination and issues facing their well-being

The theme of this year’s observance is ‘Ending Child Marriage.’ The UN called for an end to child marriage and stressed that education is a strategic background for protecting girls against this harmful practice and to recognize girls’ rights and highlight the unique challenges girls face worldwide.

Girls worldwide deserve better: better education, better survival rates, better protection from child marriage and sexual assault, better access to resources, better health outcomes and a better future. It’s a very tall order considering some of the challenges ahead but the UN and others are hopeful that Oct. 11 can be a rallying cry with which to empower girls worldwide.

“Education for girls is one of the best strategies for protecting girls against child marriage”, Secretary-General Ban Ki-moon said in his message for the Day. “When they are able to stay in school and avoid being married early, girls can build a foundation for a better life for themselves and their families.”

Putting into contest, Cherish implores the general public to be more like her father in providing help to the vulnerable girls around them to build a sustainable society for all to thrive.

“I plead with you today (well meaning Nigerians) just like I pleaded with my father, to look out for these other Mirabels’ you might come across and extend a hand of fellowship to them. Early education is very important and we must all unite to make it a staple in the growth and development of every child.

“This way you would have contributed your quota in curbing social vices that could have emanated from having these kids on the streets. Hence making Nigeria safer for all of us.

“Finally, it is pertinent to crave the indulgence of our parents/guardians to allow their girl child or wards pursue career paths of their choice, especially in sports. Yes! Sports!. Football in particular might seem to be masculine –though due to its physicality– and so, many parents (especially the elites) disuade their girls from actively enjoying and participating in the round leather game.

“The reality remains that your children are better off living their dreams. May I also intimate us with the fact that most of the influential women in the world today are sports people. If you doubt me, please google it.” She Concluded.

Making the world better for girls makes the world a better place.