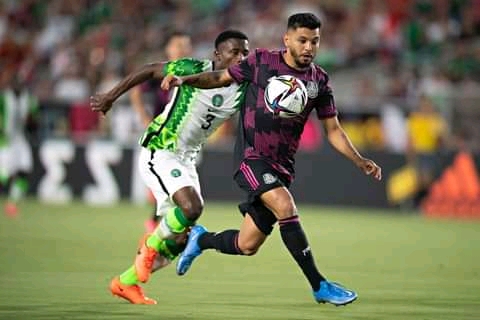 The Super Eagles of Nigeria suffered a hefty 4-0 defeat to Mexico in an international friendly match at the Los Angeles Coliseum early on Sunday morning.

Hector Herrera’s double and goals from Rogelio Funes Mori and Jonathan dos Santos gifted El Tri a comfortable victory as they wrapped up preparations for their 2021 Concacaf Gold Cup campaign which will begin on July 11.

Herrera got Mexico off to a flying start with the opening goal in the second minute, courtesy of an assist from Jesus Corona.

They went ahead to double their lead in two minutes after Napoli winger Hirving Lozano linked up with Funes Mori and the latter placed his effort to the top left corner.

Mexico dominated the first-half with chances created and ball possession while the Super Eagles struggled to create a clear chance with no shot on target.

The North Americans continued from where they stopped after the break and they turned the second 45 minutes to a one-sided affair.

Lozano came close to increasing the goal tally in the 48th minute but the Napoli star would see his shot parried away by goalkeeper Stanley Nwabili for a corner-kick.

Shortly after, Herrera bagged his brace with a low drive into an empty net after the Super Eagles goalkeeper rushed out to stop Lozano.

Nigeria’s woes were compounded as LA Galaxy star Dos Santos completed the rout for Martino’s side who will go into next week’s continental tournament with a three-game unbeaten run.

Next up for Nigeria is the 2022 Fifa World Cup qualifiers which will bring in September. The three-time African champions are in Group B alongside Cape Verde, Central African Republic and Liberia.