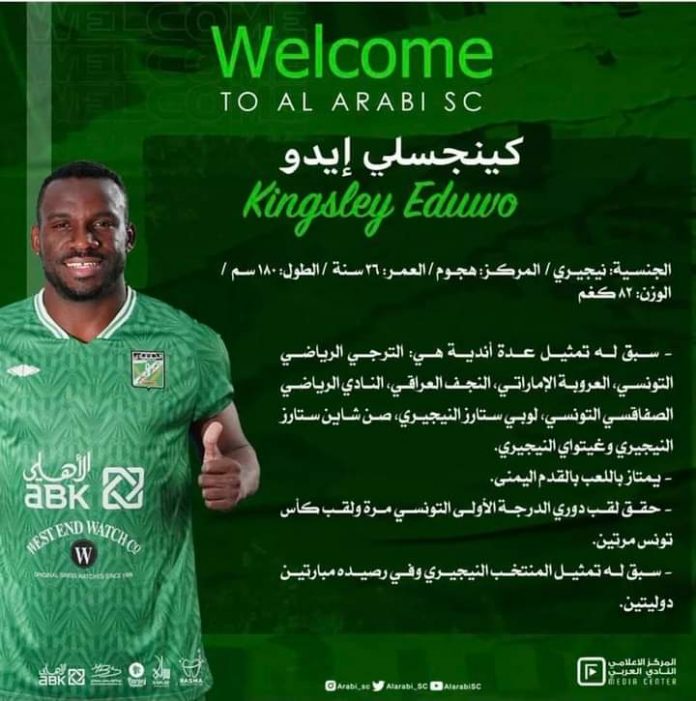 Nigerian striker Kingsley Eduwo has parted ways with Tunisian topflight side Esperance after a short spell with the club and has joined Kuwait league side Al Arabi on a free transfer.

The Nigeria international signed on undisclosed terms with the Kuwait Premier League club and will replace outgoing strikers Waleed Bakhet Hamid and Ablaye Mbengue according to reports.

The former Al-Orooba striker becomes the second summer signing for the club following the arrival of Mohammad Hadi from Al Nasr he would however be unveiled to the media at the weekend.

He is no stranger to the region, having enjoyed stints at Al-Najaf FC and Al-Orooba, and his experience will be seen as vital for the Castle Of Trophies.

Kingsley Eduwo recently ended his association with Esperance. It would be recalled that he scored three goals in 21 appearances for the Tunisian Champions.

The former Gateway United striker has travelled far and wide since the beginning of his career, having played for seven different clubs in the last 10 years.

He was with Gateway United in 2012 before joining Sunshine Stars in 2013. After a brief spell with the Ondo-based club, the striker spent two seasons with Lobi Stars, before travelling to Tunisia where he joined CS Sfaxien in 2017, making 48 appearances and scoring 10 goals.