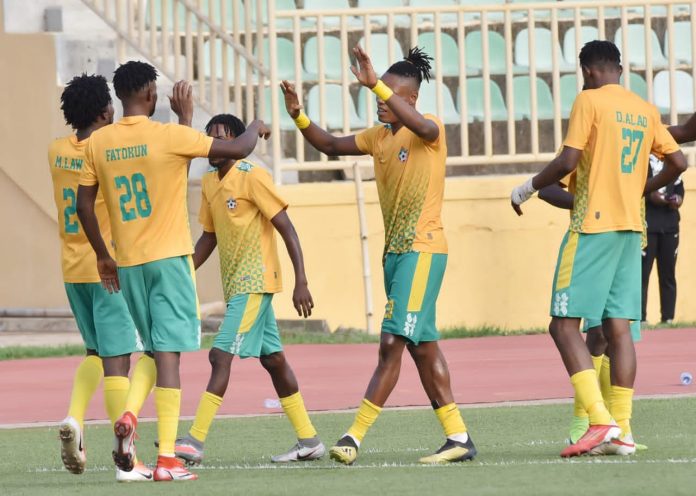 Samad Kadri, through solo effort scored the first goal for the Harmony Boys in the 38th minutes, as goalkeeper Ogundare Detan in goal for visitors failed to hold on to his lame shot, which rolled into the net.

It was a match which brought out the best out of Kwara United FC, as they dominated the match, with the visitors having only a shot on target throughout the first half.

Adeshina Gata increased the tally for Kwara United in the 57th minute, to set his team on the path of winning the interesting and crucial encounter, which was played under lock and key.

Matches between Kwara United Football Club and Shooting Stars Sports Club always draw full attention and spectatorship no matter where it’s being played, because of the rivalry, but the fans and supporters missed the encounter, following the decision of the LMC ruling that the match be played without fans and spectators.

Substitute Ayobami Junior added the third goal for the ho.ers in the 68th minutes, after connecting a close range pass from Alao Danbani who was outstanding throughout his period in the game.

Shooting Stars Sports Club reduced the tally late into the encounter, to end the match at 3-1.

On the other hand, Coach Kabir Alausa of 3SC said his boys lost concentration which paved way for United’s deserved victory, pointing out that work will continue on the team to ensure they sustain their NPFL status.

Also speaking to sports writers, the Chairman of Kwara United, Kumbi Titiloye, who cleared the air on the two coaches who were told to step aside submitted that the development was for the best interest of the club, and done without sentiment.

He congratulated the team for the victory, urging them to consolidate on the victory in subsequent matches, to further revive the continental ambition of the team.