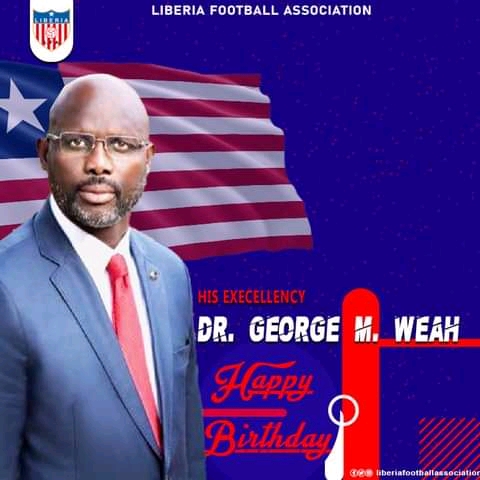 President Weah, who was patron saint, captain and technical director of the national team, won 53 caps and scored 13 goals.

Widely regarded as one of the greatest African players of all time, Weah was named Fifa world player of the year/Ballon d’Or and BBC African footballer of the year in 1995.

In 1996, Weah was named African, European and world footballer.

Known for his acceleration, speed and dribbling ability, in addition to his goal-scoring and finishing, Weah was described by Fifa as “the precursor of the multi-functional strikers of today”.

In 2004, he was named by Pele in the Fifa 100 list of the world’s greatest living players.

Weah began his career with Bong Range and Young Survivors before moving to traditional arch-rivals Mighty Barrolle and Invincible Eleven.

He had a brief stint at Ivory Coast’s Africa Sport before joining Cameroon’s Tonnerre Yaoundé.

Weah then moved to Europe on the recommendation of Frenchman Claude LeRoy, who is now Togo coach, to join France’s AS Monaco with Arsene Wenger as coach.

Weah’s iconic number 14 jersey was retired by the Liberia Football Association (LFA) in an international friendly with Nigeria at the Samuel Kanyon Doe sports complex on 11 September 2018.

The head of state featured for 79 minutes in the 2-1 defeat and received a standing ovation as he was substituted.

And he set another record by becoming the oldest international on record as was confirmed by a leading group of football statisticians.

“Weah became the oldest player, male or female, to play in the national team of a Fifa member. There are various caveats associated with this statement.

“(Namely) that (Weah’s) date of birth is correct and the fact that we don’t have complete information of all players and all their dates of birth over the years,” Neil Morrison of Records, Sports, Soccer Statistics Foundation, told BBC Sport.

“For and on behalf of the executive committee of the LFA and all football lovers, I wish the chief patron of sports a joyous celebration as he directs the affairs of our country.

“I also pray that he will be graced with many more years filled with sound health and joy,” said LFA President Mustapha Raji, who is in Cairo, Egypt as head of delegation for a friendly international against the Pharaohs.