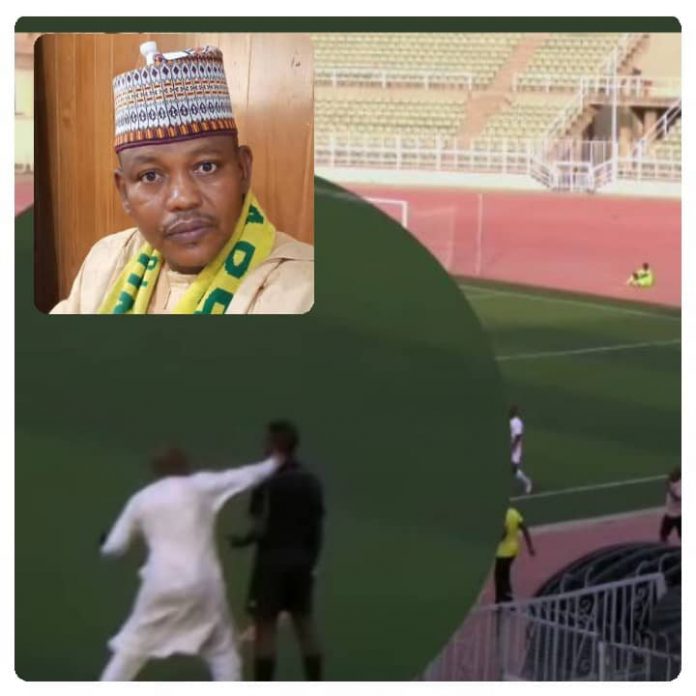 ….. Mandates Club To Follow Up On The Arrest Of Suraj Yahaya

The League Management Company have also mandated the club to invite the Police in Kano to arrest Yahaya.

Yahaya incurred the wrath of the LMC following the ugly incidents that marred the rescheduled Kano Pillars vs Dakkada FC in Abuja on Thursday.

Footage on the game that went viral on social media, saw the Pillars Chairman punching an Assistant Referee while on duty.

LMC’s verdict on Saturday read, Kano Pillars Chairman Suraj Yahaya is expelled from the league with immediate effect. The club are to follow up on the arrest of the offending official to ensure his full prosecution in furtherance of the police report lodged by the match officials on June 23, 2022.

Kano Pillars have been charged for breaching the NPFL Framework & Rules during the course of the match versus Dakkada on June 23, 2022.

Kano Pillars failed to control their officials & ensure proper conduct at all times which resulted in the assault of a match official.

The Kano club are fined One Million Naira for failing to ensure proper conduct of their officials in obvious disregard of the NPFL Framework & Rules as well as the assurance letter issued by the Kano State Commissioner of Police on June 8, 2022.

Kano Pillars shall forfeit 2 points from points accrued to them and face additional sanctions deemed appropriate in the circumstance in the event of any further similar breach of the league Rules regarding the assault of match officials.