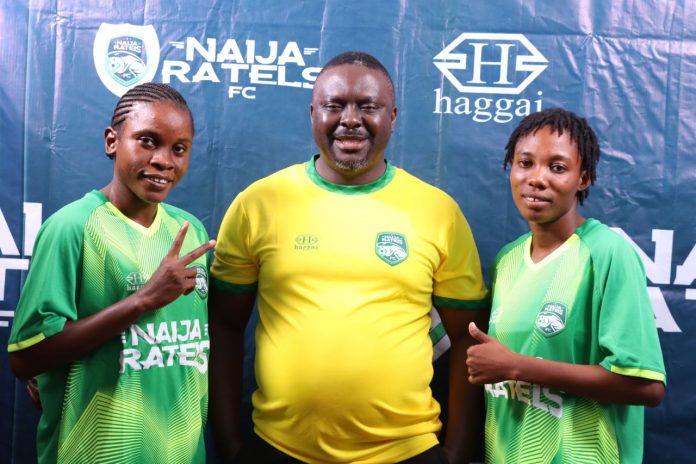 NWFL Premiership side, Naija Ratels have completed the signature of the attacking duo of Ojo Oluwatofehinti and Unogwu Deborah from NWFL Championship side, Oasis Ladies of Lagos.

Ojo Oluwatofehinti and Deborah Unogwu were key to Oasis Ladies success in the NWFL Nationwide season and all played a germaine role as the Surulere based side defeated Royaltoms International in the final of the maiden edition of the Eko Queens Soccer Championship.

Naija Ratels President, Barrister Paul Edeh, who spoke at the unveiling ceremony, believe that the duo will bring in alot of productivity and competition to the team’s forward line, admitting that it would only make the team stronger.

“We are very happy to be unveiling Ojo and Unogwu today after completing their signing from newly promoted Championship side Oasis Ladies. The duo bring to the table their freshness and vibrancy as youngsters who will be moulded by Naija Ratels.

“Signing these players is in line with Naija Ratels policy of signing young players who will be trained and impacted with, the team’s philosophy.

“Both players have great talents on the ball, their productivity is brilliant in terms of goalscoring and assists and that will definitely make the team stronger ahead of the challenges ahead.

“We all know that Naija Ratels is a team with alot of potentials,” Unogwu said at the unveiling. “I think I made a great decision to be here and of course it is a step forward in my career. I am really happy and hopefully, I can help the team to win more laurels. I appreciate the Club Chairman, Barrister Paul Edeh, the technical crew and all staff of the team.” She concluded.

On her own part, Oluwatofehinti Ojo said: ” This club has always impressed me with their success, as I followed all their games during the Championship season. Just like a line in the team’s anthem said ‘We are fearless no be mouth e dey show’. The team has no doubt stayed true to those words. The environment is good and am really looking forward to working on the pitch. It’s a new challenge for me and one that I feel will be successful.”

“Every player wants to be involved in attacking teams and Naija Ratels are one of the most attacking in the Nigerian women football fold.” She Concluded.

“It is difficult to see them leave but this is football players will have to move from club to club.

The two attackers were signed from Oasis Ladies FC ahead of Naija Ratels preparation for the new NWFL Premiership season.