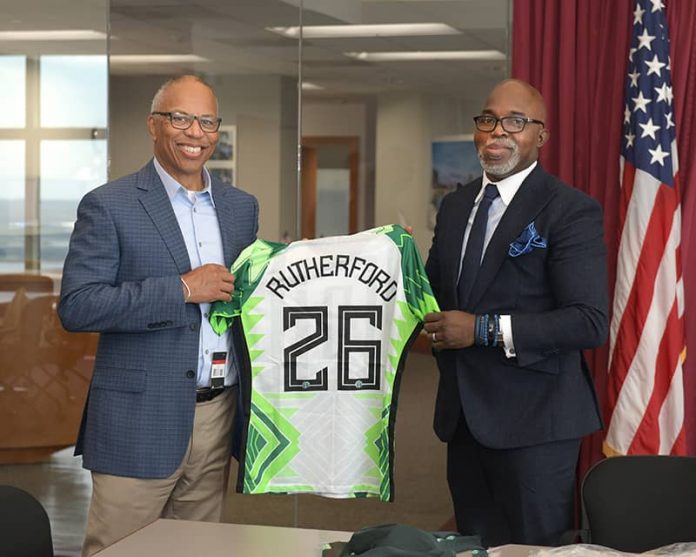 The Nigeria Football Federation and the Government of Maryland have highlighted and agreed on a number of co-operation programmes designed to enhance the development of football in the country Nigeria and the State of Maryland, an important mid-Atlantic State in the United States of America.

At a meeting in Baltimore, Maryland on Wednesday, 30th June 2021, President of the NFF and a Member of the FIFA Council, Mr Amaju Melvin Pinnick and the Lieutenant Governor of Maryland, Boyd Rutherford agreed on a number of collaborative areas including but not limited to minimum of one friendly match with Nigeria’s Super Eagles and Super Falcons in FIFA window opportunities; utilization of the platform to create a symbiotic economic relationship in broader areas of economic development; leveraging of the Baltimore-Maryland 2026 platform/assets to create added value for NFF Sponsors for broader activations; focus on youth development programmes and; the development of a formal sister city relations to cover football development and stadium management.

Baltimore, the largest city in the State of Maryland, is a candidate city for hosting of matches of the 48 –team 2026 FIFA World Cup finals, which has already been awarded to the triumvirate of USA, Mexico and Canada.

Pinnick, who was in Baltimore on a specific invitation by the Government of Maryland, said he was enthusiastic about the agreement and wished Baltimore-Maryland good luck in its desire to be a Host City for the 2026 FIFA World Cup finals. The invite was premised on the enormous respect that the Government of Maryland has for Nigeria as a nation and the NFF as an institution. Lieutenant Governor Rutherford confessed to being a great fan of the Super Eagles, who dazzled the world in an impressive debut at the FIFA World Cup in the
USA 27 years ago, while the Nigeria U23 squad (with many players of the same Super Eagles’ team), spectacularly won Africa’s first Olympic
football gold also in the USA two years later.

The meeting was foregrounded by the Super Falcons’ debut in the popular USWNT Summer Series with matches in the State of Texas, where the nine-time African champions squared up to four-time world champions and four-time Olympic champions USA for the first time in a
friendly match, and actually mounted a spirited fight despite losing 0-2. It also came three days before the Nigeria National Team’s clash with Mexico’s Senior Team in another friendly in the State of California.

The occasion equally held against the background of the fact that in a post-pandemic world, strategic partnerships, collaborations and symbiotic relationships will rule the roost. Both Pinnick and Rutherford were sanguine about the incipient relationship fanning out to the wider canvass of concrete economic and infrastructural benefits.