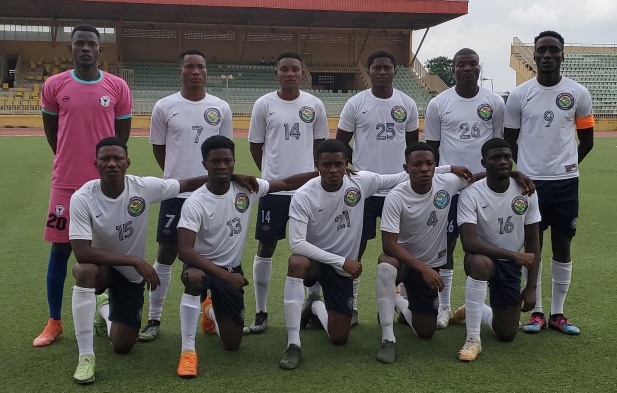 It was an electrifying local derby between host Gidado FC and SGFC Athletics in the matchday 16 of the Nationwide Division one League (NLO1) at the Kwara State Complex Stadium Ilorin on Friday Evening.

SGFC Athletics came into game with the mindset of a revenge having lost the reverse fixture at home 1-0 courtesy of a questionable penalty awarded to the away team, they came out smoking but the home side were also prepared for task ahead as they aswell came out with the fight.

The home side were gifted with an opportunity to go ahead in the 36th minutes after being awarded a penalty following a foul inside the SGFC area, the captain Sanusi Olayinka would step up to take the spot kick but saw his effort parried away by goalkeeper Godwin Friday.

Just before half time break, SGFC Athletics had for themselves a penalty appeal waved away by the center referee after Wisdom Higenus was fouled inside the box but the referee would only issue him a yellow card stating that it was a dive, 0-0 it ended at halftime.

With five minutes into the second half SGFC Athletics would have gotten the lead only for Sulamon Ibrahim’s to see his long range effort parried away by the goalkeeper for a conerkick.

SGFC Athletics kept the pressure on but yet again failed to hit the target, Gidado FC also had a fair share of their own chance but the closer they came to scoring was when Amuda Issac’s late free kick was meant by the wood work.

Goalless it ended, no winner no vanquish as both side shared the point.

Reacting after the game was the head coach of SGFC Athletics, Jamiu Isa ( The Future One) who praised his team effort stating that he was satisfied with the share of spoils.

“I am satisfied with the performance of my boys we prepared well for this game and invested so much in preparation for the game, we had our game plan which was well executed, It was a local derby that lived to it’s expectations”, He said in a post Match interview.

Reflecting on what happened in the first game where they lost at home, the gaffer said it was a different ball game now compared to when they first arrived stating that they weren’t familiar with it atmosphere, the culture and with the people at first a situation which has now changed.

“When we came around first time we weren’t use to the environment the people around and the culture so it slowed our game down a little bit in the first leg, but now you would agree that it is a different game because we’ve fully settled down and we prepared well for this game”, He concluded.