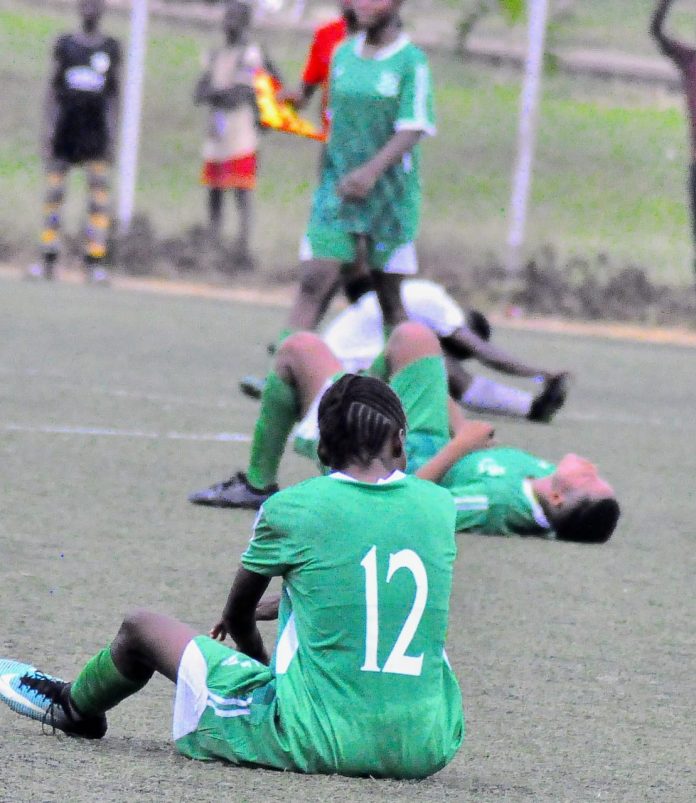 Two former Premiership clubs, Ibom Angels FC of Uyo and Heartland Queens of Owerri took the lead after Match day two giving the impression they badly needed to return to the elite league after some years in the lower league, as they separated themselves from the girls as the battle for promotion hots up at the Dipo Dina International Stadium, Ijebu-Ode with their scintillating performances.

The athletic Ibom Angels came back from a very difficult game against Oasis Football Club to clinch a deserved draw 2-2 at the extra minutes of play to set the Dipo Dina International Stadium Ijebu-Ode into frenzy Tuesday afternoon.

Oasis FC bench and some passionate supporters were already standing at the edge of the field waiting for the Referees final whistle to win the game at 2-1, after the assistant referee signalled for two minutes added time, when the unrelenting Ibom Angels scored the equaliser to take the lead on the Group A table with four points and a plus two goal difference.
This result sent Oasis FC into second place with same four points and plus one goal difference, as the league goes into Rest Day to resume on Thursday, June 16th.

In Group B, it was Heartland Queens maintaining dominance after a 5-2 victory against Beautiful Tours FC of Abuja at the Practice Pitch of the Dipo Dina International Stadium. Heartland Queens lead the table with six points and a plus four goal difference.

In hot purchase are Moje Queens of Kwara on same six points but plus 2 goal difference after they defeated Crystal Stars FC Tuesday.

Other Group B results saw Dannaz Ladies FC of Lagos beat Kwara Ladies 5-3. While in Group A, the smooth playing Honey Badgers FC forced Dream Stars Ladies of Lagos to 2-2 draw as the league goes into the first Rest Day.

The NWFL Championship League 2022 resumes Thursday with some crucial games in Group A as Honey Badgers confront Oasis FC, and Ibom Angels battle Royaltoms Intl all at the Practice Pitch of the Ijebu Ode Stadium. In Group B, would see Heartland Queens taking on Moje Queens for supremacy, Crystal Stars battle Kwara Ladies and Beautiful Tours FC contend with Dannaz Ladies as the league goes into the crucial stages.

At the end of the league on Sunday June 19, only the leaders of Group A and B will be promoted to the NWFL Premiership League.
NWFL MEDIA .