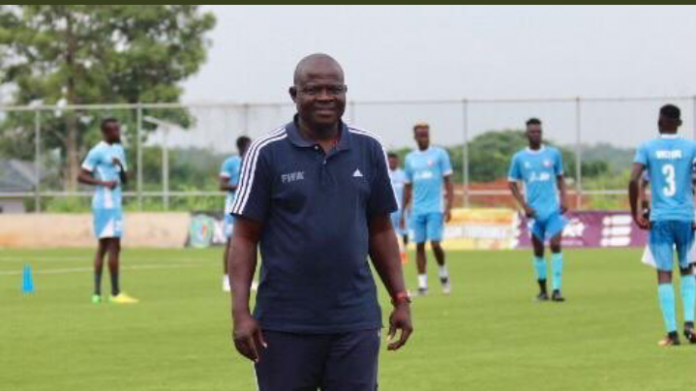 Organizers of the nation’s prestigious pre-season football tourney, Ogunjobi Gold Cup have sent a congratulatory message to Remo Stars after they picked a ticket to fly Nigeria’s flag in the CAF Confederation Cup come next season.

General Coordinator of the tournament, Tunde Shamsudeen tasked the Sky Blue Stars management to set a record, by becoming the first NPFL team to win the Confederation Cup.

“Congratulations to a business mogul, biggest private investor of the beautiful game in Nigeria and a fine gentleman, who’s humility is second to none, Honorable Kunle Soname.

“He has proven to critics of the NPFL that private investors can achieve successes investing in club football, with Remo Stars as an example having secured the CAF Confederations Cup qualification after three attempts in Nigeria’s topflight division.

“CAF Confederation Cup debutant Remo Stars, crowned champions of the 9th edition of the Ogunjobi Gold Cup in Ikenne, is a huge boost to the tourney.

“Ogunjobi Gold Cup has once again made a bold statement, as not just a pre-season tournament but a platform were champions are made.

“We are delighted to be part of Remo Stars achievements, as they have surpassed their fans expectations and truly deserved to clinch the CAF ticket.

“I want to use this medium to charge Remo Stars not to make the numbers in the tournament but be one of the teams contending for the trophy.

“The Confederations Cup, since it was formed in 2004, only Sunshine Stars made it to the semi-finals in their first attempt in 2011. So Remo Stars surpassing the feat is possible with the right ingredients.

“A special thanks to Soname for bringing continental football to Ikenne, as the town will soon be agog with best of African club football and fans visiting, thus projecting the rich history of the people of Ikenne.”

Meanwhile, Shamsudeen also expressed his relief after Niger Tornadoes and Shooting Stars retained their NPFL status after a turbid season.

“Our last edition semi-finalist, Tornadoes and runners-up Shooting Stars distinguished themselves as fighters, as they fought hard till the very end of the season to secure their status in the topflight division come next season.”

As regards MFM FC, sad the Olukoya Boys got relegated to the Nigeria National League, that doesn’t mean end of the world for the club, rather a new challenge.

Going by the words of Fetus Allen after the season ending game against Nasarawa United.

“We are confirmed relegated but that is not the end of life. I am confident that we will be back in the NPFL very soon. This is one of the pendulums of life. We just have to face it.”

This we have charged the MFM FC management, as all hands must be on deck to see they gain promotion as it’s a different ball game in the NNL.