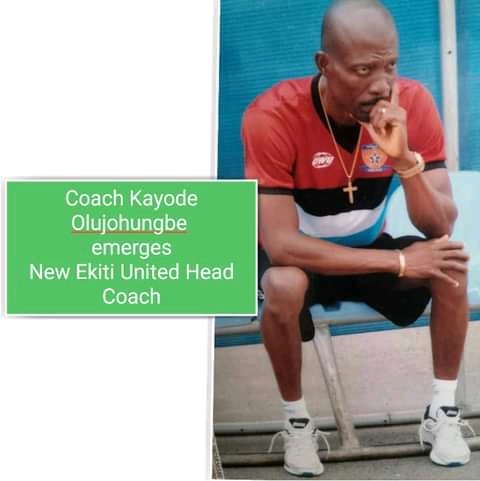 The management of Ekiti United Football Club has named Kayode Olujohungbe as its new head coach.

The secretary of Ekiti United FC, Ayodeji Olowolafe while addressing members the press on Wednesday at the club’s secretariat in Ado said the former Sunshine Stars head coach came tops after the interview conducted last Thursday.

The new head coach of Ekiti United FC took charge of Sunshine Stars of Akure in the NPFL during the 2016/17 season.

The Ondo State Football Agency had employed Austin Eguavoen to take over from Olujohungbe with a view to improving the status of Sunshine Stars FC.

Coach Kay as he’s fondly called had tinkered Ondo State Female team, Sunshine Queens and led them to the 2014 final of the Nigeria Women Federation Cup and ended third in the Nigeria Women Premier League 2014.

The Physical and Health Education graduate from the prestigious Obafemi Awolowo University -OAU, Ile-Ife, possesses Grade one NIS and, CAF Intermediate Coaching certificates as well as CAF Coaching A and B Licences.

He helped OAU to win gold at the 1996 Nigeria University Games and and played professional football with Iwuayanwu Nationale and Concord FC in 1992.

He began his coaching career in 1993/94 as physical trainer and later became head coach at Concord FC between 1993 and 1998.

He became Sunshine Stars FC Assistant Coach in 2002/03 season and was given same role in 2010 before eventually becoming the head coach in 2014/16 season.

The Ondo State born tactician was named Technoial Adviser of Sunshine Stars in 2017, same year that he won the Nigeria South West Pre-season Tournament in Lagos.

He won the FA Cup in Ondo state on six occasions and helped Rising Stars FC to gain promotion from Amateur to Pro league in 2011 and won silver at Nigeria Women Confederation Cup in 2015.

The new Ekiti United FC head coach will be officially unveiled at a later date as he hopes to resume duty soon.