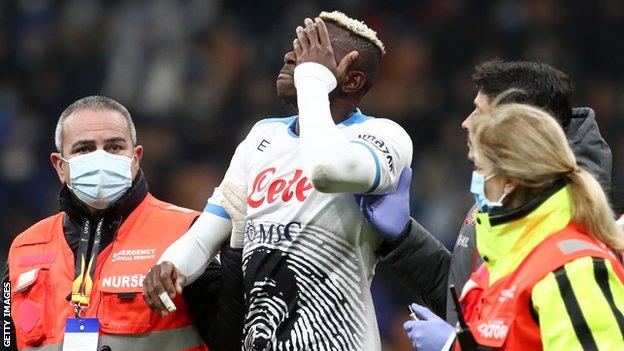 Napoli and Nigeria star Victor Osimhem underwent a successful surgery today and Luciano Spalletti hopes to have him available for the match against Milan on December 19, www.owosports.com.ng gathered.

Osimhen was diagnosed with multiple displaced facial fractures after a clash of heads with Inter defender Milan Skriniar on Sunday.

According to La Gazzetta dello Sport, Osimhen had a successful surgery and he is expected to return to action in less than a month.

At least, that’s what Napoli coach Luciano Spalletti hopes. The Tuscan tactician delivered an injury update in an interview with Sky Sport Italia.

“I hope he will return against Milan, the doctors told me that the surgery won’t prevent him from being available in three or four games,” Spalletti said.

Napoli face Spartak Moscow in Europa League tomorrow and Spalletti must cope without Osimhen, Zambo Anguissa and Lorenzo Insigne, who hasn’t trained with the team due to knee problems.