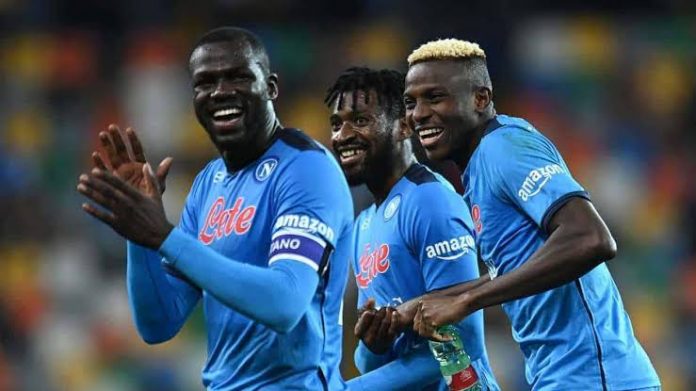 Napoli President Aurelio De Laurentiis has cast a huge doubt over the future of Super Eagles striker Victor Osimhen after he vowed never to sign an African player, Owosports.com.ng reports.

He however stated that he would only sign an African player if only they sign an agreement backing out of the Africa Cup of Nations.

This however didn’t come good for players like Victor Osimhen and Andre Zambo Anguissa, who represent Nigeria and Cameroon respectively.

Kalidou Koulibaly who won the AFCON tournament with Senegal in February had in July joined Chelsea in a fee worth €34m.

“I told them lads, don’t talk to me about Africans anymore!” said De Laurentiis during a streamed event.

“I love them, but either they sign something confirming they’ll back out of playing the Africa Cup of Nations, or otherwise between that tournament, the World Cup qualifiers in South America, these players are never available!

“We are the idiots who pay salaries only to send them all over the world playing for others.”He concluded.

It’s left to be seen what happens in the remaining days of the current transfer window with Victor Osimhen being a subject of speculation for Bayern Munich and Chelsea FC who are in desperate need of a Striker.