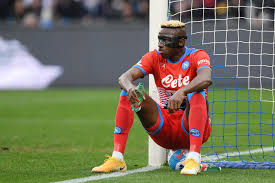 Victor Osimhen has waved off transfer speculations stating he will decide on his future later in the summer, Owosports.com.ng gathered.

The Napoli striker rated at around £85million, is highly coveted after scoring 18 goals in 32 appearances last season, has been a subject of transfer speculations with top European club’s including Arsenal, Manchester United and Newcastle United all queueing up for his signature.

According to CalcioMercato the striker said he knows ‘many people’ would like to sign him but vowed to decide on his next move after going on holiday.

He said: “I know there are many people that would like me in Spain or England, but I don’t think it’s the right time to talk about it now that I’m with the national team.

“I always go out on the pitch to do my best both with the national team and with my club.

“I don’t know my future, I know anything can happen, but now I just want to go on holiday with my family, clear my head and recharge my batteries. Then we’ll take care of everything else.’

Reports in Italy claim Arsenal have made a bid of £51m for the former Lille star.

But that would appear to be significantly short of Napoli’s demands, which could price the Gunners out of a move as they look for a striker in the wake of Alexandre Lacazette’s departure.