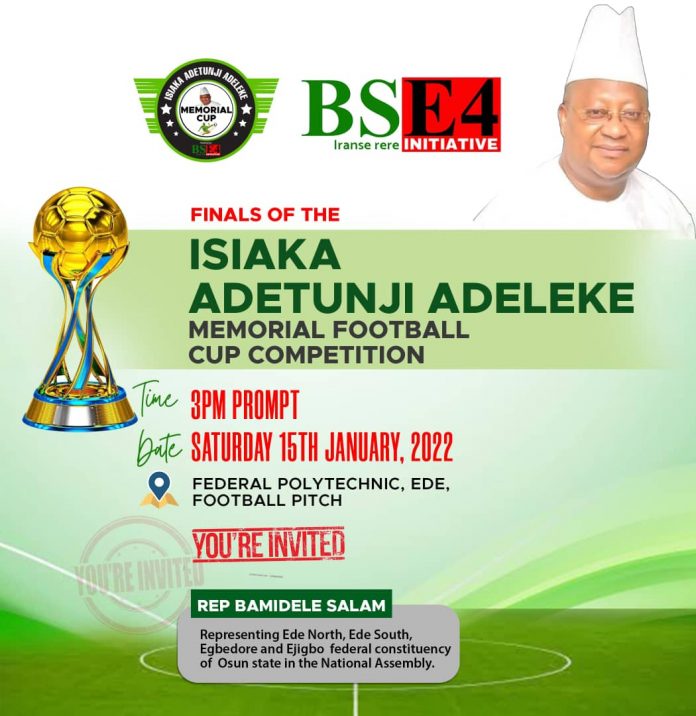 The stage is now set for the final of this year’s Otunba Isiaka Adetunji Adeleke Memorial Cup, as Babatunde Eyiowuawi FC, Ede-South defeated GFCC Ede-North by 2-0 in the second Semi-Final played on Thursday, at the Ido-Osun High School, Ido-Osun.

Goals from Farooq Oyeniyi and Taiwo Lawal in the 65th and 77th minute ensured that the Ede-South based side got to their first ever final.

Recall that the first Semi-Final played between Hammola Int’l FC and New Dawn FC on Wednesday also ended 2-0 in favour of the Ido-Osun side.

The final of the tournament between Hammola Int’l FC and Babatunde Eyiowuawi FC will come up this Saturday, January 15th, which is a significant date, as it is the birthday of the late first executive Governor of Osun State, Otunba Isiaka Adetunji Adeleke.

The Competition, which is dedicated in honour of the first Civilian Governor of Osun State, Otunba Isiaka Adeleke is solely sponsored by Rep. Bamidele Salam who represents the good people of Ede North, Ede South, Egbedore and Ejigbo Federal Constituency of Osun State in the National Assembly.

The final of the Competition will be played at 3pm at the Federal Polytechnic Ede, Football Pitch.