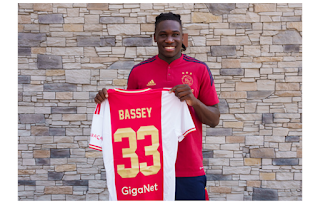 Rangers have confirmed that defender Calvin Bassey has completed a permanent transfer to Ajax, with the Scottish giants receiving a club-record fee, Owosports.com.ng gathered.

The 22-year-old Nigeria international has put pen to paper on a five-year contract at the Amsterdam Arena, keeping him with the Eredivisie champions until June 2027.

Rangers’ previous record sale was of right-back Nathan Patterson, who joined Everton in January for around £16m.

A statement from the Gers’ official website read: “Rangers Football Club can today confirm Calvin Bassey has joined Ajax in a deal which is the largest in Rangers’ history.

“Calvin leaves with best wishes from everyone at Rangers and we thank him for his hard work and commitment over the past two seasons.”

Rangers have made a significant profit on the defender, who they bought for just £230,000 from Leicester City in the summer of 2020.

After failing to make an instant impact at Ibrox under former manager Steven Gerrard in his first season at the club, Bassey developed into a key asset under Giovanni van Bronckhorst.

The versatile defender, who can play at ether centre-back or left-back, started 45 of his 50 appearances for Rangers across all tournaments last season and provided six assists.

The Nigerian picked up the Man of the Match award in the showpiece event despite suffering defeat on penalties and he was also named in the competition’s Team of the Season.

Bassey now leaves Rangers after two full seasons in Glasgow and moves to Ajax where he will wear the number 33 shirt.

Bassey has now joined up with the rest of the Ajax squad on their pre-season tour of Austria, and the defender could make his competitive debut for the club against PSV Eindhoven in the Johan Cruyff Shield on July 30.

Bassey has become Alfred Schreuder’s third signing of the summer window after the arrivals of Steven Bergwijn and Owen Wijndal.

It is understood that the Dutch giants will now turn their attention to signing Porto’s Francisco Conceicao and RB Leipzig’s Brian Brobbey, while the future of star attacker Antony who has been linked with the likes of Man United and Liverpool remains uncertain.