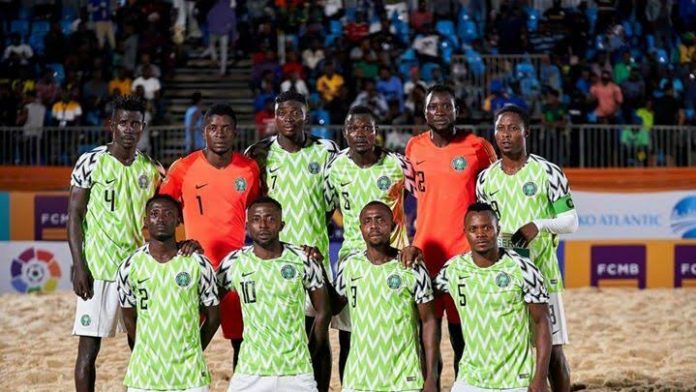 The Super Sand Eagles will make a return to international tournaments since its disbandment in 2019 after the Nigeria Football Federation confirmed the country will participate in the 2022 Beach Soccer Africa Cup of Nations, Owosports.com.ng gathered.

In December 2019, the NFF disbanded the Super Sand Eagles following their disappointing outing at the 2019 World Cup and resolved that the country would no longer participate international beach soccer tournaments indefinitely.

The NFF board, rising from executive meeting in Benin City, lamented the unimpressive outing of the Super Sand Eagles at the 2019 FIFA Beach Soccer World Cup in Paraguay, saying: “unanimously resolved to put on hold Nigeria’s participation in international beach soccer tournaments until such a time that certain benchmarks, most importantly the creation and sustenance of a beach soccer league in the country, are met.”

The disbandment saw the Supersand Eagles missed the 2021 Beach Soccer Afcon held in Saly, Portudal in May which was won by Senegal and the subsequent Beach Soccer World Cup in Russia, who eventually won the title.

A successful back-to-back National Beach Soccer League season campaigns forced the Amaju Pinnick led board to rescind their decision and has now registered the country for the upcoming showpiece in Mozambique.

The development was confirmed by CAF announcement of 14 teams, including Nigeria to engage in this qualifying phase draw for the Beach Soccer Africa Cup of Nations coming up on Friday, 24 June 2022 in Maputo. The draw will kick off at 10:00 local time (08:00 GMT) and livestreamed on CAF digital Platforms.

The seven qualified teams will join 2021 runners-up Mozambique who qualify automatically as hosts. The Beach Soccer Africa Cup of Nations Mozambique 2022 will be held from 21 to 30 October 2022.