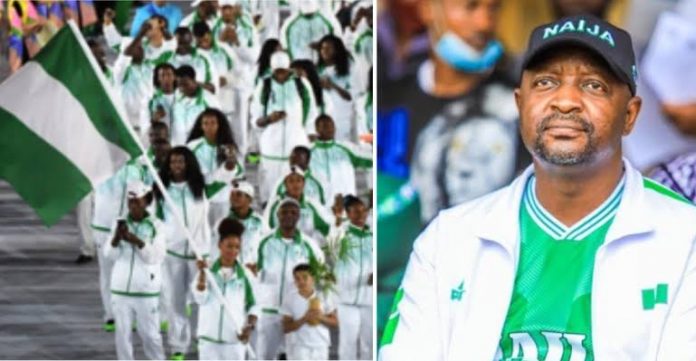 The Honourable Minister of Youth and Sports Development Sunday Dare has reiterated that welfare of athletes has remained a priority for him since assuming office in 2019.

In a chat with pressmen during an interactive session in Abuja, Dare said, “Before I assumed office, I knew that welfare of athletes will always be key to their performances. This was why I immediately introduced the Athletes’ Welfare Scheme, where past athletes who brought glory to Nigeria in different sports were considered for reward. This did not exclude those who have transited to the great beyond like Late Rashidi Yekini, Samuel Okwaraji, Ali Jeje and others.

“We needed to recognise what they did for Nigeria and also further restate our commitment to the line in our National Anthem that says, ‘the labour of of our heroes past, shall never be in vain’.

“Again we celebrated and awarded 60 Sports Icons as a way of telling the heroes of tomorrow that their successes will also be remembered in the future and entrenched in the annals of our history.

“Furthermore, two of our athletes won medals at the 2020 Tokyo Olympic Games and almost instantaneously, they were rewarded for their outstanding performances.

Nigeria’s best performance at the Olympics in 13 years was at the Tokyo 2020 Olympic Games courtesy of the medals won by Ese Brume and Blessing Oborodudu,” Dare explained.

Speaking on the increase in financial reward for paralympic athletes, the Sports Minister explained that the Ministry implemented a whooping 300% increase of their bonuses.

“Those who won Gold medals received $15,000, silver medal winners got $7,500 while bronze medalists got $5000 each. This was just another way of motivating and appreciating our athletes,” the Minister said.