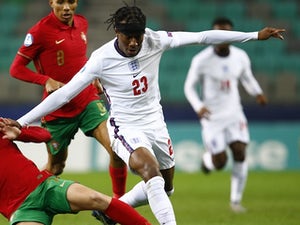 Noni Madueke has revealed he turned down a good opportunity to play at the Old Traford or for Chelsea because “he wanted to progress quicker into the first team”.

The 19-year old who still has a four years contract at Dutch club, PSV came through the youth system at Tottenham where he captained the Whites’ Under 18, in 2018. When the opportunity knocked at his door, he decided to go to Holland.

In a chat to BBC Sport, Madueke who is now believed to have pulled interest from a number of top clubs in Europe categorically stated why he turned down the chance to join either Chelsea or Manchester  United as he wanted to “progress quicker into the first team”.

“Chelsea, Manchester United, a lot of European clubs made offers” Madueke told BBC Sport. “I came here one time and as soon as I came I wanted to sign straight away. I knew going from Tottenham to United is pretty much the same thing.

“The reason I wanted to go was to progress quicker into the first team. PSV is a top European club. It made so much sense at the time and it makes sense now.”

He has found the back of the net on 15 occasions in 50 appearances for PSV in all competitions.