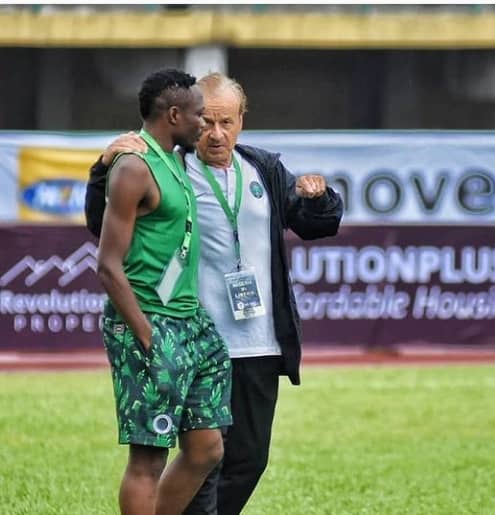 Gernot Rohr has given justification why he started three defenders in Nigeria’s 2-0 over the Central African Republic (CAR) in Sunday’s Qatar 2022 FIFA World Cup qualifying game at the Japoma Main Stadium Douala, Cameroon.

Recall the Franco-German, his assistants, squad and indeed fans of Super Eagles were left in awe following last Thursday’s 1-0 shocking defeat to The Wild Beasts at the Teslim Balogun Stadium, Lagos.

However, not every coach in the African terrain would take such a risk, knowing how physical the game is, rather Rohr disregarded the conventional back four and opted for the trio of Troost-Ekong, Awaziem and Collins, thus pushing Balogun the midfield.

In his post-match interview, “It was a good reaction from my team, we were unlucky to lose in Lagos. We change the system and played three at the back and I think this help. We enjoy the leadership role of Ahmed Musa to win this game.

“CAR made a lot of fouls but fortunately, we don’t have injuries. We have to prepare for the games in November and I hope everything will be fine.”

“Our fans watched from tv, thank you for your support, our team are fighting and we have a young team. We can make mistakes just like the other day, but they will never give up.”

Nigeria stay top of Group C with 9 points from four games in the 2022 World Cup (CAF) qualifying campaign and will face Cape Verde and Liberia in November.

Cape Verde’s Tubaroes Azuis (The Blue Sharks) are second on the log with 7points followed by CAR, 4points and Liberia with 3 points.