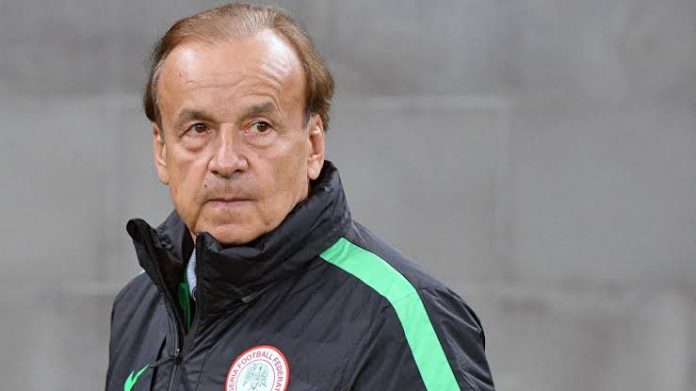 Former Super Eagles coach Gernot Rohr is in line to becoming the Black Stars gaffer ahead the Qatar 2022 Worldcup Playoffs between Ghana and Nigeria in March, Owosports.com.ng gathered.

According to reports from ghanaweb.com, The Ghana Football Association (GFA) on Wednesday announced it has parted ways with the Serbian in the wake of the stars disastrous outing at the ongoing African cup of Nations (AFCON) in Cameroon. The four-time champions excited the competition bottom of their group which included Morocco, Gabon and Comoros after amassing just a point as Ghana failed to win a game for the first time in the history of the competition.

Following the exit of Rajevac, GFA is set to go on a hunt for a replacement and Rohr who until December last year was in charge of the Super Eagles, believes he has the capacity to turn around the fortunes of the Black Stars.

Despite achieving the targets of qualifying for the AFCON and the Worldcup Playoffs was strangely shown the exist just some weeks before the Nations Cup in Cameroon.

“Gernot Rohr is very much open to the Ghana job. Ghana football has great potential and his experience of the African game will help him steer the team in the right direction”, a source close to the coach said.

The Franco-German, enjoyed a five-year spell with Nigeria guiding the team to the FIFA Worldcup Russian 2018 and third place at the 2019 African cup of Nations in Egypt. He will go on to steer the Eagles to a record 54 games,

He is credited with building a youthful Super Eagles squad and getting the likes of Ola Aina, Joe Aribo, Maduka Okoye, amongst others to switch allegiance to Nigeria.

“His knowledge of African football is deep especially with African teams. Besides Nigeria, he has also handled Burkina Faso, Niger and Gabon. He has the quality to handle the Black Stars”, the source added.

With Ghana drawn against Nigeria in the Playoffs for the 2022 FIFA Worldcup qualifiers, Rohr is hoping to get the mandate to force a bitter pill down the throats as a payback for his shock dismissal.

“Gernot achieved FIFA Worldcup qualification with Nigeria in 2018 and is keen on guiding Ghana to 2022 edition. Ghana has big name players like Andre Ayew, Thomas Partey, Daniel Amartey amongst others who are hungry to play at the FIFA Worldcup and Gernot Rohr can help turn that dream into a reality”.

Meanwhile, former Black Stars midfielder Otto Addo has been linked with the position. Another name making the rounds is Ibrahim Tanko, who won the Champions League with Borussia Dortmund in 1997.