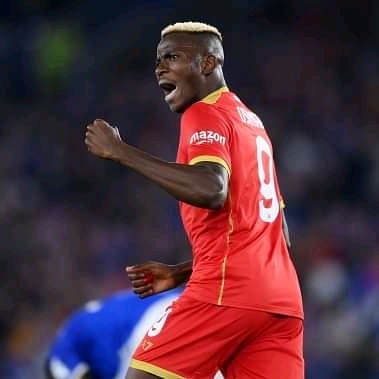 Nigeria National team manager, Gernot Rohr has said that Nigeria and Napoli striker, Victor James Osimhen has what it takes to become the next Didier Drogba

The German born tactician in an interview with Italy news outlet Tuttomercato, described Osimhen as one of the best strikers currently in Europe.

“Victor is currently one of the best strikers in Europe, but not yet in the world. Osimhen is young, ambitious and very motivated. I think he has what it takes to become a great striker, one of the best ever. But he still has to grow.

“We are very happy with him. Osimhen has made the whole process of the youth teams, already scoring important goals with the senior national team despite his young age. Our attack is certainly in good hands, also thanks to Victor.”

“I am convinced that he will have treasured last season to improve and grow, both as a man and as a professional. This season, in other words, will be better than the previous one.

” I am referring to both Napoli and Nigeria, Osimhen will be the protagonist to the sound of heavy and decisive goals just like in Leicester.

“Osimhen can become the new Drogba, I have no doubts about this. Victor has many qualities that recall those of the Ivorian legend Didier, we hope he can retrace his steps at the club and national level,” he concluded.

The former Lille of Striker made the headline last week in the Uefa Europa league as he netted a brace in the opening group game against Leicester City at the King Power Stadium, England.