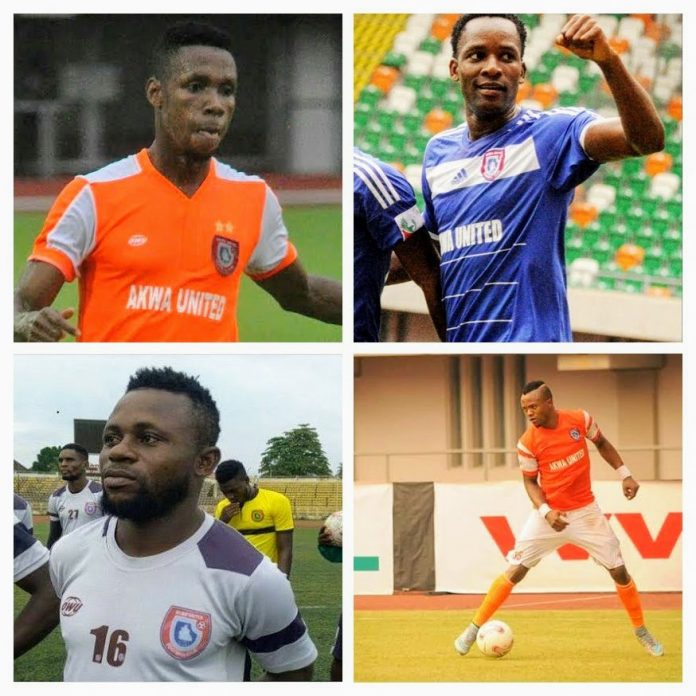 They are the promise keepers and they are players of newly crowned NPFL champions, Akwa United FC.

About two months ago, these players, alongside twelve others, who were members of the victorious Akwa United team that won the federation Cup in 2017, came knocking on the door of the Nigeria Sports Mouthpiece, a leading sports media whatsapp platform that also acts as a pressure group.

The group which was formed in March 2017, is the brainchild of Canada based Adewale Ajayi, a renowned sports journalists and former media officer of the Under 20 National team of Nigeria.

Led by current Abia Warriors goalkeeper Olorunleke Ojo, these players, all present and former members of Akwa United, appealed to Nigeria Journalists of repute, to help them begin a fierce propaganda as part of a desperate move to pressurize the state government to fulfill their AITEO CUP winning largesse

Coincidentally, the two players in Akwa United were the initiators of this idea and they vowed to reveal every internal workings within the club that may be needed in this push to get their money.

The team captain, Reuben Utobong Effiong and his team mate Friday Ubong, did not stop there. They casted aspersions on the club chairman Paul Bassey, calling him names and claiming he was the brain behind the non payment of their AITEO CUP largesse. They even went as far as insulting the Akwa Ibom state governor Udom Gabriel Emmanuel for not fulfilling his promise.

In one of the comments captured on the 70M GANG PLATFORM that was set up for this purpose, Reuben made this comment as a pledge to the journalists.

“We have lived for three years now without this money. Now we have people that will help us get the money. What are we all waiting for?. Guys come on, let’s pay”

He also signed the SOLEMN VOW AGREEMENT that was posted on the platform for all to sign.

Former coach of Akwa United Abdul Maikaba and his assistant are on this whatsapp platform and have since fulfilled their promise to the media.

As much as the media will not want to join issues with these players, we see their actions as total affront and a breach of trust. An agreement is an agreement and these players must learn to stand by their words.

These debtors have bitten more than they can chew and must be ready to dance to the music of angry spirits.

Please find below the names of the AFFECTED DEBTORS and their phone numbers.